← 5 PC Upgrades the High Street Doesn’t Want You to Know About Leather-bound computer program written by Ada Lovelace sells for £95,000 →

QWERTY: A Short History of the Computer Keyboard

Beginning with the humble typewriter, the history of the modern computer keyboard is a long and interesting one. In 1868, Christopher Latham Sholes patented the first practical typewriter, notably without a QWERTY keyboard. 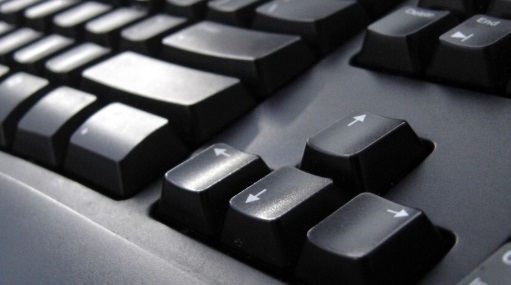 A decade later, in 1877, the Remington Company began mass marketing typewriters which did feature the QWERTY we know and are familiar with today. Here’s the rest of the story of how QWERTY came to dominate the world a century later.

The QWERTY is born

Sholes and his partner James Densmore patented the QWERTY keyboard in 1878 and it’s still the most desirable keyboard layout in the English speaking world over 140 years since. The story goes that Sholes developed his keyboard to overcome the mechanical shortcomings of early typewriters. This is because pressing a key on a typewriter causes a metal hammer to swing in an arc, hit an inked ribbon that is suspended in front of a piece of paper and thereby leave a character on the page. If two hammers meet, chances are they will jam together and not return to their resting positions.

To overcome this, Sholes separated the most commonly used letters as best he could. This minimised the chances of the hammers jamming. This worked well but as time went by other keyboard arrangements were invented that claimed to be more ergonomic and efficient. The most notable is the Dvorak keyboard, invented in 1936, which is still used by some hardcore fans of this keyboard type today. They are, however, in a tiny minority. This is because the QWERTY is deemed efficient enough and familiar enough to not require any changes, considering its ubiquity throughout the English speaking countries.

The first major breakthrough for the keyboard was the invention of teletype. Also known as the ‘teleprinter’, it’s thanks to the work of Charles Krum, between 1907 and 1910, that brought teletype technology to a wider audience.

In the 1930s, improved keyboards allowed integration with telegraph technologies. Punch card systems were also combined with typewriter keyboards to create key punches. These helped develop the adding machines which were very commercially successful. From here the race towards the modern computer was on, but first the Binac computer would use an electromechanically controlled keyboard to write data to a magnetic tape for input and output. This is widely considered a computing milestone.

The QWERTY keyboard persisted throughout the modern era and hasn’t shown any sign of coming to an end any time soon. Though with each new wave of technology, the QWERTY’s validity is assessed, it hasn’t so far been trumped. People believed it to have died when early mobile texting required 3-4 characters to be assigned to one button, but the advent of smartphones and the Blackberry put paid to this theory within a few years.

Even with smartphones, the ‘soft’ keyboard which disappears from the screen when not in use has been reconsidered multiple times. This results in weird formations such as the FITALY, Cubon and OPTI soft keyboards. Will the QWERTY ever be dethroned? Probably not.

Indos Computer Services have been keeping small-to-medium businesses in business since the dawn of the PC. We’re a company that likes to keep things simple when it comes to backup services, email setup and support, networks and accounting software. Our team are experts in their field but will always explain our services in layman’s terms and without jargon, so you know exactly what you’re getting. For the finest IT support team in St Albans, Watford, Hemel Hempstead and the surrounding areas, contact us today.

This entry was posted in Uncategorised and tagged dreams, QWERTY. Bookmark the permalink. ← 5 PC Upgrades the High Street Doesn’t Want You to Know About Leather-bound computer program written by Ada Lovelace sells for £95,000 →